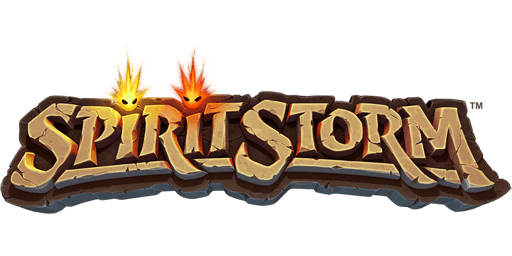 Spirit Storm is a free-to-play mobile app developed and produced by Kabam for iOS devices in Spring 2014. It combines fast-paced, real time action elements in an engaging hack-and-slash, dungeon crawler.

Your objective is to find epic Gear and loot, and unleash the power of the ancient Spirits to crush one's enemies! Each equipped Spirit grants the player's Champion unique abilities that can be tapped and dragged across the screen to fire off powerful moves and defeat foes! All the while, awesome treasure can be found almost anywhere. With hundreds of Spirits to be discovered, the variety of options for customization and strategy is huge!

After centuries of darkness, human scholars on the island of Arkos have recovered the ancient art of Spirit Summoning. To help rebuild the empire, an Arcane Academy was formed to train the best and brightest heroes from frontier settlements across the sea. Along with a tiny spirit guide named Pix, one Champion now sails home to the town of Windholme to face an unknown storm brewing on the horizon.

Community content is available under CC-BY-SA unless otherwise noted.
Advertisement